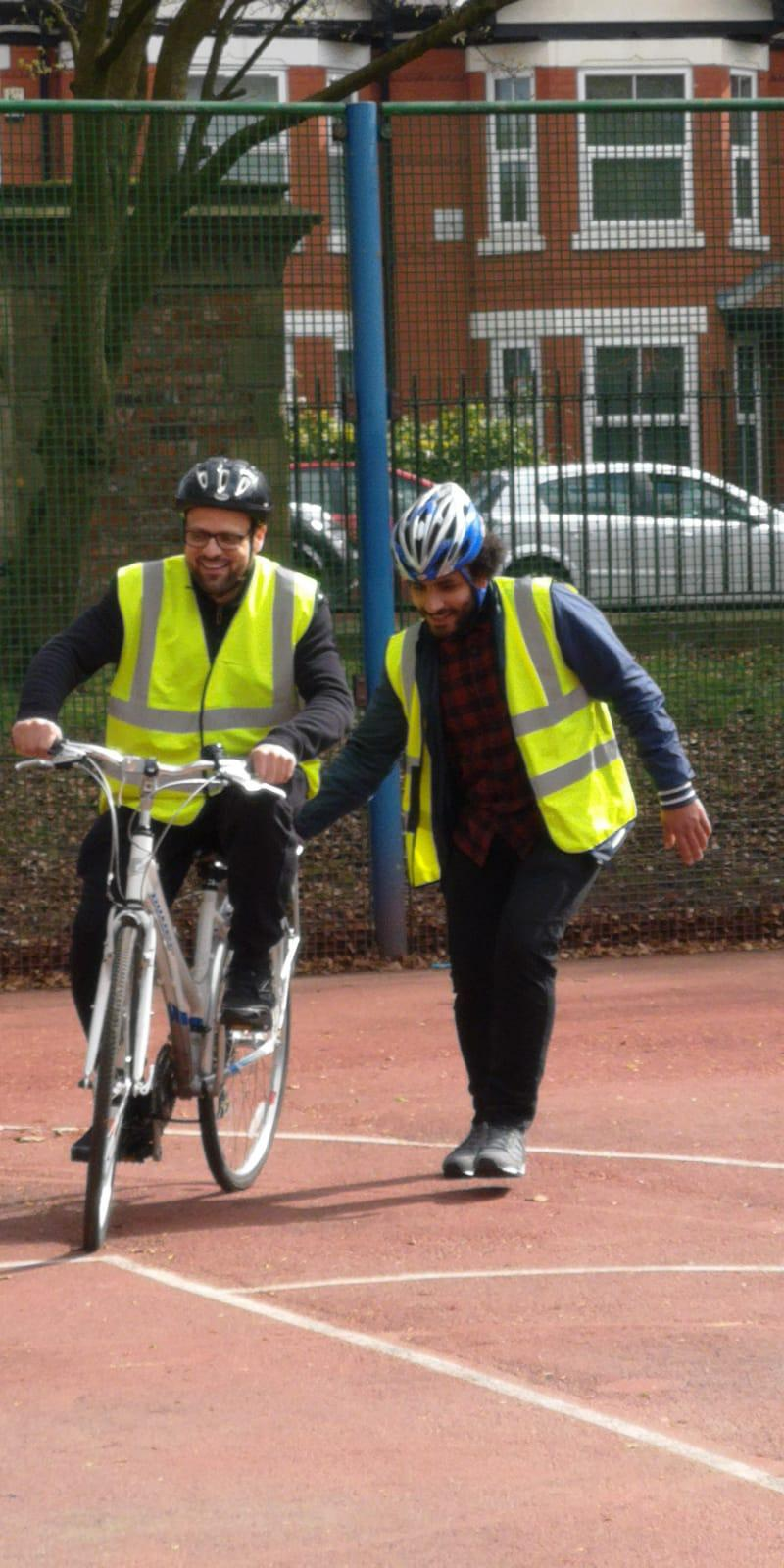 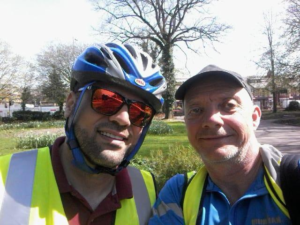 Mohammed learnt to ride at the Bike Hive in 2019.  This is his cycling story:

I’m from Palestine but unfortunately I can’t go back to Palestine.  I can’t go back to anywhere because I’m currently stateless.  I’m here in the UK now but most of my life I was in Saudi Arabia.  I rarely found people cycling on the roads or commuting from one place to another using bicycles because the weather is so hot there.  Children use bikes for fun in the parks or during nights, not to get around.  Most of the time people use cars to get around.  The temperature could be around 35 -37 degrees at the moment and in the summer sometimes it reaches 60 degrees.  Yes, it’s very hot in the summer.  So that’s why I’m not aware of people riding bicycles.

When I was a kid my brothers used to ride bicycles.  They are 3 years and 4 years older than me.  Most of the time they told me ‘You will never ride a bicycle; you don’t know how to ride.’  It was very mean of them because we were sharing the same bicycle and they used it almost all the time.  Then I rode it myself one day and I crashed down and had a wound on my leg, so I stopped thinking about riding.  I was about 10 years old, living in Medina where I was born.

Now I’m in UK and the weather is much better than in Riyadh and I see a lot of people riding around on bicycles, commuting from place to place – it’s much safer to ride here in the UK.  That’s why I thought ‘Oh, why don’t I ride a bicycle to commute?’  It’s much faster than walking and it’s much cheaper than having a car.  So that’s why I decided to learn riding a bike.

I think the first time the resistance was from my brain: ‘Oh my god, you will never be able to learn to ride a bicycle’.  But then I told myself it will be a new adventure for me.  Because whenever somebody knows nothing about riding you think you will fall down and get hurt.  Thankfully I didn’t get hurt – I fell down but it was in the park and I put my hand on the fence and I wasn’t hurt.  It was a lot of fun.  In the beginning it was scary too.  I felt like I was a bag of coal!  I remember feeling my heart racing – my heart rate going up and up.  Then I felt like I was a stone, I was so tense especially my upper body.  Every time I came back from a lesson I got pain in my wrists and my hands for one day.  It was a journey – like a little adventure journey.  I’d like to thank everyone who helped me learn.

The most beautiful thing about my journey is the help I got from the Bike Hive, that it took me two sessions to know how to balance which is amazing.  I feel I have achieved a lot.  And I think that this would never have happened if I didn’t get help.  And especially I would like to thank Abdullah and Neill – they were both with me.  I remember after I learnt to ride, Neill told me – Okay, you did it, let’s take a picture together!  It was an amazing experience.  And I’d like to thank Jane at City of Sanctuary for introducing me to the Bike Hive.

I’m now riding a bike round the park every week.  Once we went with a group to the Fallowfield Loop.  It was like another new adventure.  It’s difficult – you imagine you will smash into a car, or suddenly a car might smash into you.  So I was very anxious at the time, but I feel more comfortable now.

What made me learn how to ride a bicycle is to challenge myself, to prove to myself that I have the ability.  I can achieve more.  Your mind can tell you that you’re not good enough to do something, but if you try it, then you can tell your mind ‘you were wrong, I am able to do this’.

I found the Bike Hive is a combination of good-hearted people, experience and a safe space for riding.  For me it’s like magic – I never thought I could learn to ride a bicycle at my age.  I would say it’s like a piece of cake to ride a bicycle.   Before it was like a nightmare, but now it’s a piece of cake.  I’d encourage anybody who doesn’t have the knowledge or experience to start with Bike Hive.  Now I go frequently because balancing is not enough – you need to practice more until you get used to riding.  So I come every week to practice and I feel that I’m getting better every week.  Now I can use my bell in the park, and I’m learning to ride with one hand.  I’m looking for a used bike to buy so that I can come here with my own bike.  I’ve asked at the Bike Hive and they told me that later there might be a good second hand bike for me.  And they’ll help me to maintain it, so if I have any problems they can help me to repair it.  I’d like to use my bike to go to college – that’s my next move.

There is a proverb in Arabic – It’s like: ‘the man who is afraid of the genie, he will see it’.  This is how it happens – if you manage your fears you can manage how to ride a bicycle.  The first thing I told myself is ‘you should forget about fear’.  Just slow down, think quietly and forget about fear.  That’s what helped me learn more quickly than I thought.    The fear of falling is a big factor.  If you let it control your mind you will never learn to ride. 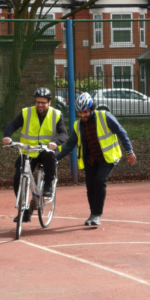